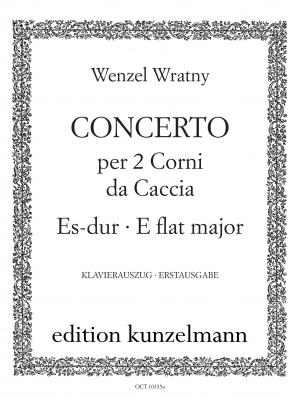 Venceslav Wratny, or Karel Venceslav Wrattni worked as a musical director in Graz from 1785 to 1789, later as musician in Ljubljana from 1794 to 1804 and from 1804 as Kapellmeister in Graz. His works, mostly pantomimes and operas, were performed after 1791 by Joseph Bellomo. Venceslav Wratny died after 1808 in Gorizia (Frulia, Italy).

This edition is based on the manuscript parts of the „Concerto per due Corni da Caccia Soli concertante a plena Orchestra“ in E flat major, which are situated in the Royal Library of Denmark in Kopenhagen.

This light and unpretentious composition is not too ambitious for the soloists and is thus also suitable for skilled amateurs and prospective students.