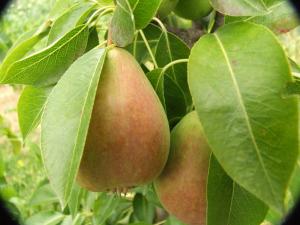 A setting of the well-known picture book of "Joggeli" who doesn't want to shake down the pears, implemented as a theme with variations.

Joggeli - portrayed by the clarinets - is too lazy to shake down the pears from the tree, so the pears won't fall. The master sends out the dog (played barking and howling by the trombones) to make Joggeli do his work, but the dog doesn't bite him. Also the stick (drums) doesn't hit the dog, the fire (flutes) doesn't burn the stick, the water (saxophones) doesn't put out the fire, the calf (horns and euphoniums) doesn't drink the water, the butcher (trumpets) doesn't sting the calf. Finally, the master himself playing the tubas comes and wants to restore law and order, all now want to accomplish their duties, and in the whole mess the pears finally fall.

The piece is about 6:30 minutes and was premiered by the Feldmusik Vorderthal at their concert 2011 with the slogan "apples and pears".